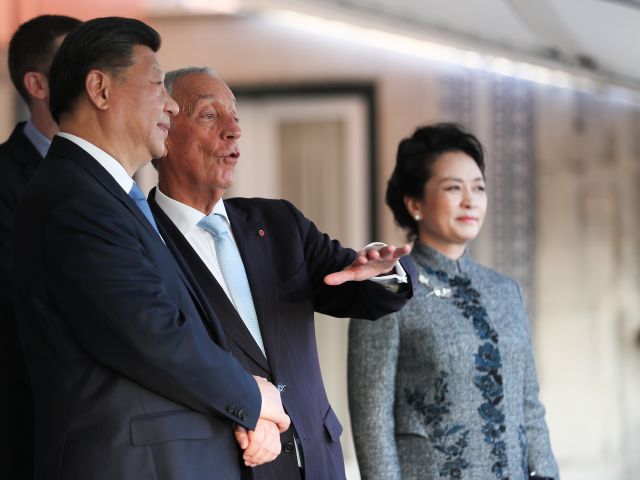 Portugal’s president, Marcelo Rebelo de Sousa, has described relations with China as being the “best ever in history” at this moment and expressed confidence that the two countries can team up in an “active fight” against climate change.

“I am sure that I will see Portugal and China united in an active and determined fight for the environment and respect for the commitments of combating climate change,” he said, in a reference in part to joint ventures between the two countries’ companies in the field of renewable energy generation. The head of state was speaking at an official dinner he gave on Tuesday night in honour of the president of the People’s Republic of China, Xi Jinping, and his wife, Peng Liyuan, at the Ajuda National Palace in Lisbon, at the end of the first day of Xi’s two-date state visit.

In his speech, which was published on his official website, de Sousa reiterated that he would like to see Portugal and China undertaking “international cooperation in defence of the values of multilateralism, international law, the rule of law, peace, development and human rights” – points he had made earlier on receiving Xi at his presidential palace.

De Sousa also said in the speech that he “would like to see more trade between the two countries” because they would “both win” from this. “I would like to see Portugal and China with an exchange of investments that will continue the effort initiated a few years ago.” The Portuguese president expressed a desire to see the two countries “closer in their people’s knowledge, in education, in science, in culture”, stressing that Portugal rejects a mere “mercantile view” of bilateral relations. In his view, this precise moment of Sino-Portuguese relations is, “perhaps, the best ever in history” and a “promising future” is anticipated. According to de Sousa, China and Portugal had “an exemplary relationship in the past” and it is “again exemplary in the present”.

With regard to Macau, formerly administrated by Portugal handed back to China in 1999, he argued that “it was always a link” and “never a reason for separation or disagreement” between the two countries, “because it has never been a colonial possession, but rather the result of a serene understanding that Portuguese and Chinese always knew how to respect.” De Sousa declared that Portugal was proud to “be the country of the western hemisphere with the longest uninterrupted relationship with China” and noted that “Portugal and China have never had a single military conflict”. The two countries “have not always agreed, but we have always known how to talk … valuing what most unites us and relativising what separates us.” There are, he noted only “rare examples” in the world “of two nations with a common history so old and, simultaneously, so friendly.”
The president spoke to Xi of the “special and profound fascination” that China exerted on the Portuguese from the start. He cited excerpts from literary works by Fernando Pessoa and Eça de Queiroz as examples.

Looking ahead and expressing “confidence in the future,” de Sousa also quoted ancient Chinese sage Confucius on respect for the past (“I transmit, I invent nothing”) and revolutionary writer Lu Xun (“Trust only him who doubts”) as well as Eça: “You can stumble on every kind of item in China throughout the last ten thousand years except a pessimist.” He ended with a toast to Xi and his wife, “for the prosperity of the people of Portugal and China, and for the constant development of friendship and Luso-Chinese partnership.”

(4min read) Once upon a time, there was a mystical and involving place in Portugal, a true…
27
Jan

Green light to a new…