Is the Portugal Golden Visa Ending?

Is the Portugal Golden Visa Ending?

The buzzing news worldwide mentions the end of the Golden Visa in Portugal. This non-official announcement was briefly made by Portugal’s Prime Minister António Costa at the 2022 Web Summit this past November; however, according to recent news, the Portuguese Parliament has officially declared to reject the decision from the political party Bloco de Esquerda on the request of ending the Golden Visa investment programme.

The Portugal Golden Visa Programme remains active and available to non-EU citizens looking to obtain future property investments in Portugal since its inception by the Portuguese government in 2012. The Portugal Golden Visa Programme officially celebrated 10 years in October, bringing forth over 6.6 billion euros of investment revenue, to be exact €‎6 674 927 181,30 were invested, from October 2012 to November 2022, 11 384 Residence Permits were issued to investors, while 18 617 residence permits were granted to adjoining family members.

Take a look below at the Portugal Golden Visa statistics and evolution over 10 years,  for more in-depth statistics, please view our extended article HERE!

The Portugal Golden Visa shows no sign of ending this year or beyond!

The Golden Visa Programme in Portugal despite the ending rumours continues to be successful, most importantly a stable and profitable method of investment for non-EU citizens, and avid investors looking to establish business ventures, and property investment in Europe, while obtaining temporary residency, with immediate visa-free travel to the Schengen area, this programme not only includes the investor applicant but also their family. According to the recent Portuguese Parliament evaluation & vote, there is a definite assurance that the Golden Visa Programme in Portugal will not end anytime in the next 12 months.

What are the best schools in Portugal for my kids?
Is Portugal a good option for Middle Eastern Families?
Most Powerful Passports in the World
Portugal is The Best Place to Retire

What is the Portugal Golden Visa?

The Portugal Golden Visa is an EU-residency programme for non-EU nationals who have made a significant investment in Portugal, eligible investments must be in real estate, by making a capital investment, or creating employment opportunities.

What Are the Advantages of the Portugal Golden Visa?

Applicants of the Portugal Golden Visa will be eligible to live, work and study in Portugal, allows low physical presence requirement from the golden visa investor with eligibility to travel freely within the Schengen* area, and hold the ability to apply for a Portuguese passport after 5 years.

Which Locations in Portugal Work Best for the Portugal Golden Visa?

The Portugal Golden Visa programme is eligible in Portugal, categorized into high and low population density; the high-density locations are primarily coastal regions, while low density will be the interior region of the country.

Now, for those investors looking to obtain property investment in prime locations of Portugal such as Lisbon, Porto and the Algarve, the eligible Portugal Golden Visa properties will require a commercial or touristic property licensing. Taking this into account, Portugal Homes has dedicated to adhering to newly implemented regulations as of January 2022 and developed a real estate portfolio exclusively for Portugal Golden Visa Programme in the two most desired locations for property investment in Lisbon and the Algarve.

Look at our video and Q&A below for further information!

Q: What is the Golden Visa Programme?

A: “The Golden Visa Programme is essentially a programme that allows you freedom of movement within the European Union. Ultimately, how it works, there’s lots of different options, but the most popular one is usually an investment in real estate for an amount somewhere between €280,000 and €500,000.

And from off the back of that investment, you’re allowed to live and work in Portugal, travel freely within the EU and ultimately get citizenship in Portugal. After five years of keeping the investments and spending time in Portugal over the last few years, there’s been quite a lot of changes to the programme regarding the amount of money that you need to invest, regarding where you can invest and what kind of property that you can invest into.”

Q: Has the Portugal Golden Visa Programme Changed? And How Long do I Need to Stay in Portugal?

A: “The programme itself hasn’t changed too much in that regard; you still need to spend an average of seven days in Portugal per year. You can still live and work here freely, and you can still get citizenship at the end of the five years. The important part is really to understand what you need to invest into and the amount of money that you need to invest.

We did a video earlier this year detailing just exactly how the visa program works and the different levels of investment. So, feel free to have a look at that, and it goes into much more depth in terms of how the programme works, and our website, we detail all the steps that you need to do have gone to Lisbon, Portugal, and what the requirements are.”

Learn more about the Portugal Golden Visa eligible property regions & types, changes implemented as of January 2022, in this article.

A: “So the reason that I’ve been asked to talk to you today is Mr. António Costa, the Prime Minister of Portugal, made some comments on the second in November at the Web Summit here in Portugal, regarding the Golden Visa Programme and potential changes or the potential end to the program.

One thing that I can confirm is that they voted in Parliament recently since the second of November, and there’s not going to be any changes to the Golden Visa Programme, certainly not anytime soon and hopefully not even over the next 12 months.”

Q: How Has Portugal Benefited from the Portugal Golden Visa?

A: “I think it’s important to understand the Golden Visa over the last ten years and the revenue that is brought into the country to also understand why the government does not really have any intentions to stop it. Over the last ten years, it’s brought around €6 billion of investment into the country, which also results in around about €80 million per year in taxes, which is vital income for the country and for the economy. So, in my opinion, the Golden Visa is going to be around for a long time, and under no circumstances does the government have any intentions of ending.”

Q: Why Was There Talk of Ending the Portugal Golden Visa?

A: “So, following on from the comments of the Prime Minister, Bloco de Esquerda, which is a political party in Portugal, they submitted a document just asking basically for Parliament to review the Golden Visa. They conducted their review and voted against the end of the Golden Visa Programme. So, the golden visa,  it’s not going to end anytime soon.

Now, what I’m not saying is that there won’t be any changes coming in the near future, but right now they voted that it’s not going to end. And the intention and the focus now in Parliament is more to deal with state budgets and such. We have a socialist government in Portugal, and it is the first time the party has become more prominent in power in a while, and they want to make sure that they’re dealing with all the immediate issues in Portugal, and the Golden Visa isn’t one of them. I think the Golden Visa makes great headlines, and I think Bloco de Esquerda having asked to stop the golden visa because it brings good headlines.”

Q:  Is the Portugal Golden Visa the Main Culprit Behind the Increase in Rental Prices?

A: “The reality is property prices are shooting up in Lisbon, and this has more to do with the tourism industry than the Golden Visa. Lisbon’s gone from 6 million tourists a year over the last ten years to 13.8 million. The airport has a capacity of 20 million, and I think it’s taking in around 26 million passengers a year. Portugal has become a popular place to be!

It’s a very small city, and when you have such an increase in tourism, rents are going to increase, and people want to do short term rentals rather than long term because it generates a lot more income for them. So, you know, the big issue here is trying to understand how they can help local people whilst also not affecting the tourism industry, which is around 20% of the Gross Domestic Product (GDP) here.

The Golden Visa is an easy scapegoat for many political discussions, which gives good traction, makes good press, and it’s very easy to talk about! And a lot of people like to write about it, but ultimately, it’s great for the country, brings in a lot of much needed income, and a lot of high-net worth individuals into Portugal.”

Q: What is Your Personal Outlook on the Portugal Golden Visa Programme, Especially for Those Looking to Pursue a Golden Visa Investment?

A: “So, the Golden Visa gets spoken of a lot in the media; however, in our opinion it’s not going to end. It’s just been voted to say that they’re not going to end it and, in my opinion, it’s going to be around for a long time.

Moving forward, if you are looking to invest into the Portugal Golden Visa Programme, we have a team at Portugal Homes with a wealth of experience that can help and guide you through all the different processes and everything that you need to make your investment a success.”

Portugal Homes, part of the Harland & Poston Group is immensely proud of showcasing our dedicated staff members that deliver Golden Visa real estate and investment advice to our clients daily; where each client’s needs are taken into careful consideration, in order to deliver the best property for their needs and for maximum investment returns. Our expert team is here to assist avid investors looking to obtain the Golden Visa for EU residency through real estate investment in Portugal. 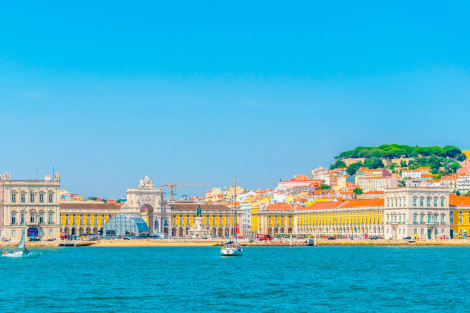