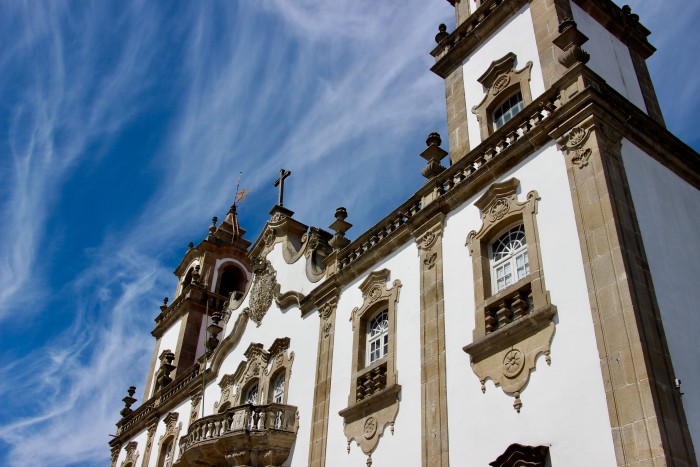 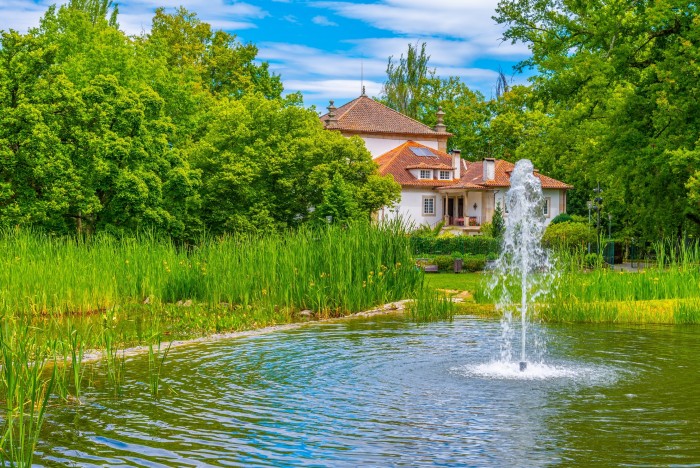 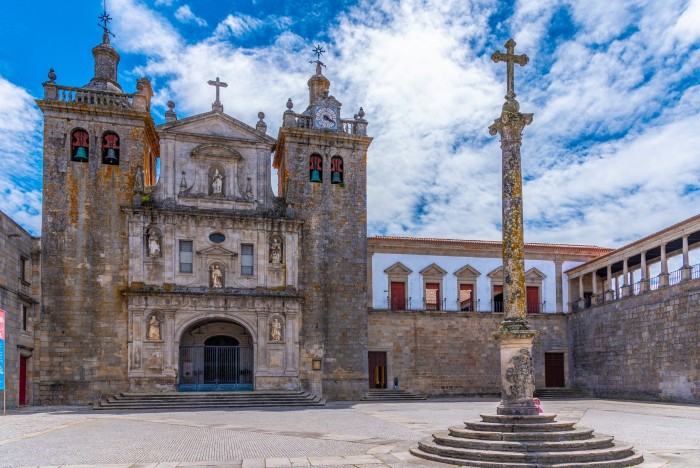 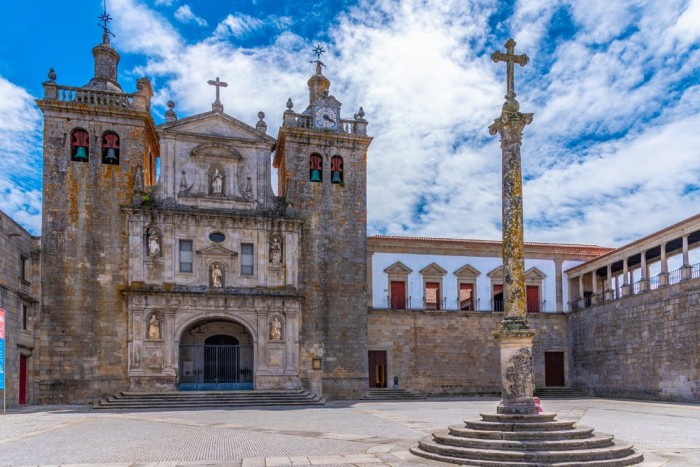 In one of the highest points of the city and crowning one of the most beautiful squares in our country, we find the Cathedral of Santa Maria de Viseu. Built at the beginning of the 12th century, the Cathedral of Viseu underwent numerous changes between the 13th and 17th centuries. Inside, we can see the first Renaissance cloister of Portugal and a magnificent vault from the 16th century, as well as a sculpture of the arm of São Teotónio, the first Portuguese saint. On the upper floor, in the old Capitular Hall, you’ll find the Museum dedicated to the Cathedral’s Treasury, whose collection portrays the 900 years of the cathedral and the Passeio dos Cónegos. Additionally, as located on the upper floor, the museum offers one of the most beautiful views over the city. 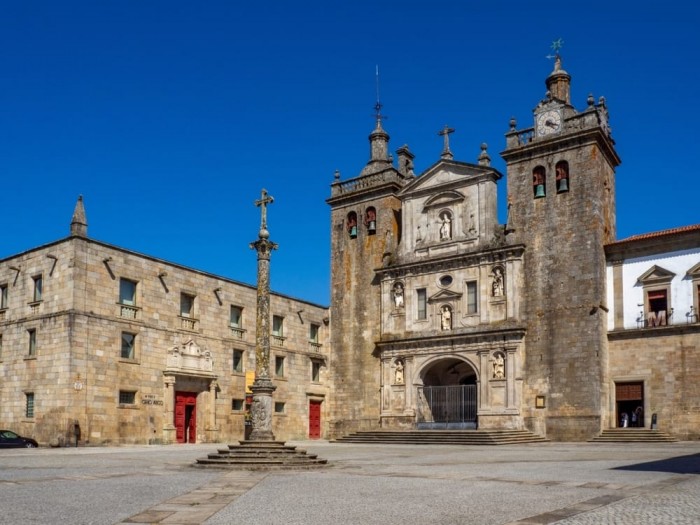 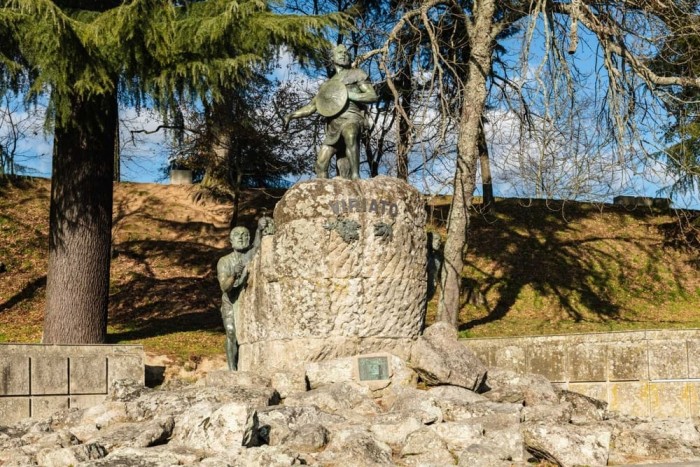 Cava de Viriato is one of the most emblematic monuments of Viseu. Although it has been associated with the historical figure of Viriato, the leader of the Lusitanians who resisted the Roman expansion, many doubts remain about who ordered the construction of such a powerful monument.

Cava de Viriato is a monument of an octagonal plant, built for military purposes, with 32ha of area. The association with Viriato is nothing more than a legend. The famous Lusitanian warrior is represented in an attack position and surrounded by the courageous “warrior-shepherds” in a 1940 statue. It was designed by Marianno Benlliure, sculptor of the late 19th century and the last great master of Spanish realism. 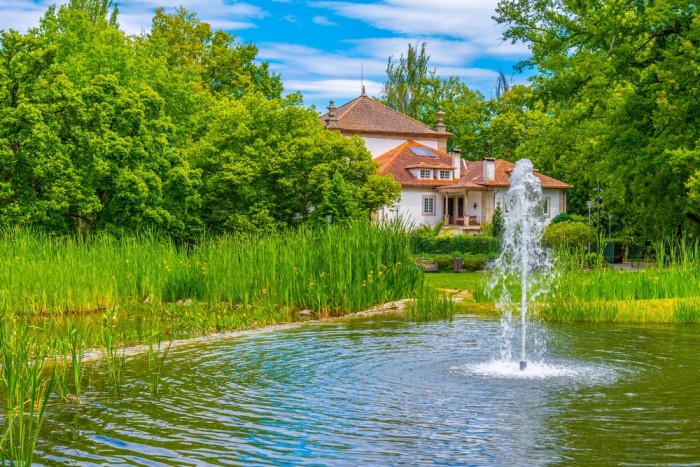 Aquilino Ribeiro Park has centuries of history. It was once part of Quinta de Maçorim, where the convent of Santo António dos Capuchos was built, in 1635. The imposing oaks that we can still see today were planted by the Capuchin friars of S. Francisco on the fence that once guarded the convent.

Converted into an urban park in 1955, it contains varied flora species, such as holly, cherry and oleander. You will enjoy the explosion of colours, aromas and the tranquillity conveyed by the moving water.

It is a space where people like to spend their spare time, where they can breathe fresh air, have fun, stroll and do sports. It is considered the lung of the city.

Don't forget to remember Aquilino Ribeiro, one of the exponents of national literature, who, since 1974, gives the Park its name. 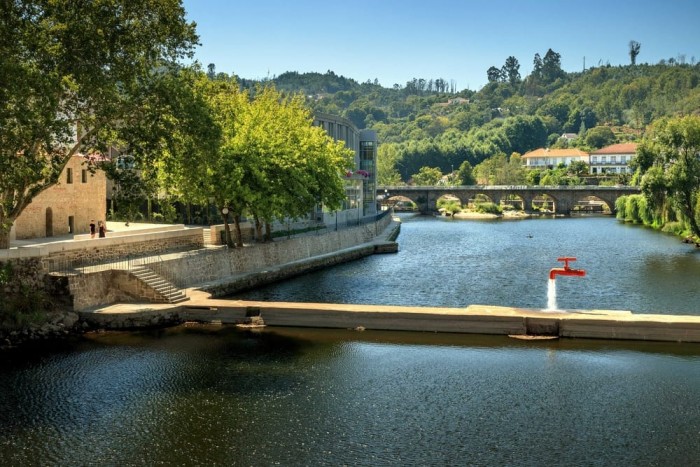 With more than two thousand years of history, S. Pedro do Sul baths are one of the main spas in Portugal and the largest in the Iberian Peninsula.

The spa is open all year round and has two thermal buildings for three purposes: therapeutic thermalism, physiotherapy and wellness.

Several reputable doctors have increasingly recommended thermal treatment instead of taking medicines. The option for a non-aggressive, preventive treatment and without side effects such as thermal healing, lead to a significant improvement in the quality of life.

With an annual average of 16,000 visitors, S. Pedro do Sul baths combine the unique properties of its water with the splendid nature surrounding the spa town. It is situated in the outstandingly beautiful Vouga valley and has the reputation of being one of the best in the country. 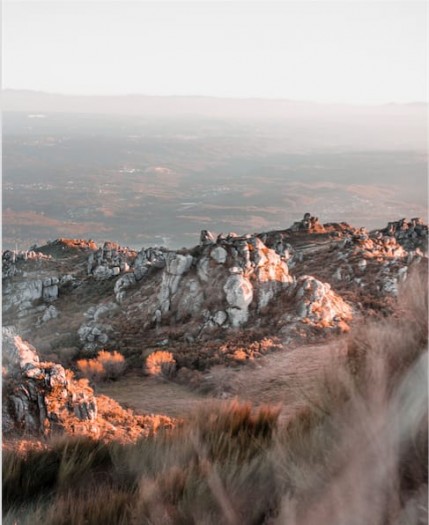 The beautiful Serra do Caramulo has about 1071 meters of altitude, and it is located between the old regions of Beira Alta and Beira Litoral. Caramulo is known for its landscapes of outstanding natural beauty, picturesque mountain villages and several courses of crystalline water.

Throughout the mountains, you will find picturesque villages of great charm and tradition, some of which have been restored in recent years for tourist promotion and heritage protection. Hence, there are great places for accommodation and a variety of adventure and nature tourism attractions.

In the Cambarinho Botanical Reserve, you have access to a beautiful natural world where you can find the largest concentration of oleanders in Europe. In an area of 24 hectares, you’ll find the beautiful oleanders blooming, especially in May and June, filling the mountains with colour.

The Aerodromo Municiapal Gonçalves Lobato is Viseu’s airport. It handles regular flights to Bragança, Vila Real, Viseu, Cascais (Tires) and Portimão from Monday to Saturday. However, if you’re coming from abroad, Lisbon’s airport is the best choice. It handles the highest number of international flights in the country and is where the main airlines fly to.

There is an Express bus operating from Lisbon, Sete Rios, to Viseu several times a day. The price ticket ranges between 14€ and 17€, and the trip takes around three hours and a half. Going by train is not the best option as Viseu doesn’t have any train station. The city is currently served by the Beira Alta railway line, with the closest stations being Mangualde ad Nelas, which are 20 km away from the city.

The best way to get around Viseu is through the bus network called STUV. For more information about all the routes, visit the website.

There is also a tourist train covering the main areas of the city, which enables you to get to the best sights of Viseu. It departs from Rossio and travels throughout the whole city.

In order to make getting around the city easier, Viseu has a funicular, that operates since 2009. It connects the historical cava do Viriato monument with the outskirts of Viseu, which is very useful for locals.

Regarding local commerce, Viseu has local markets where you can find all kinds of food products: greengrocers, butchers, fishmongers, bakeries and much more.

Viseu is also known for its local handmade products in ceramics, leather, wool, weaving among others. Artesanato Viriato, Cem Reis, Andaver Viseu are some well-known craft stores, where you can find unique art pieces made by national creators.

Viseu typically tends to have mild and rainy winters and warm and sunny summers. In the summer, even though temperatures are high, nights are cool. The average temperature of the coldest month (January) is 7.1 °C, and of the warmest month (July) is 21.7 °C.

The winter, from December to February, is quite mild. Summer, from June to mid-September, is hot and sunny. Precipitation is relatively abundant throughout the year. It ranges from 20 mm in the driest months (July, August) to 195 mm in the wettest (December). Snow in Viseu is quite rare, however, it is more frequent than in central and southern Portugal.

On average, there are around 2,730 sunshine hours per year: therefore, the amount of sunshine is very good in the region.

The best restaurants in Viseu are of regional cuisine. The evergreen regional staples such as cabritinho grelhado (grilled kid) and bacalhau (dried salt-cod) are absolutely delightful dishes, that keep to seduce tourists over the years, make them fall in love with the regional delicacies.

Our suggestions for the best restaurants in Viseu are:

Viseu is located in the interior part of the country, not having any coastline nearby. To the west of Viseu, around 100 km away, lies the northwest coast of Portugal, namely Coimbra district beaches. Here you will find beautiful wide-open sandy beaches. Costa Nova and Figueira da Foz beaches are the most well-known, but you should also explore Murtinheira, Tocha and Leirosa.

If you are a river beaches enthusiast, you should visit the beautiful places offered by the centre of Portugal: Senhora da Ribeira, Folgosa and Sangemil beaches are great spots to spend summer days.