The world’s healthiest cities to live in 2021 have been revealed and all the top three are placed in Spain and Portugal!

A recent study done by money.co.uk has elected Valencia, Madrid and Lisbon as the best places in the world to live and enjoy a pleasant and healthy life. The final rank was made out of life expectancy, the cost to be healthy, air pollution, obesity rates, safety and sunlight hours.

In fact, Portugal and Spain share plenty of similarities in what culture, eating-habits and lifestyle concerns, which may explain the conquest of the healthiest places to live in.

Bordering the Mediterranean Sea, these countries’ diets comprise a lot of seafood dishes and usually include healthy sources of omega-3, fats, protein and vegetables. Poultry, eggs and whole grains are also prevalent foods eaten in daily meals, while red meat and sweets are not so appreciated. Portuguese and Spanish healthy eating habits all come down to having very well-balanced meals with excellent nutritional value. 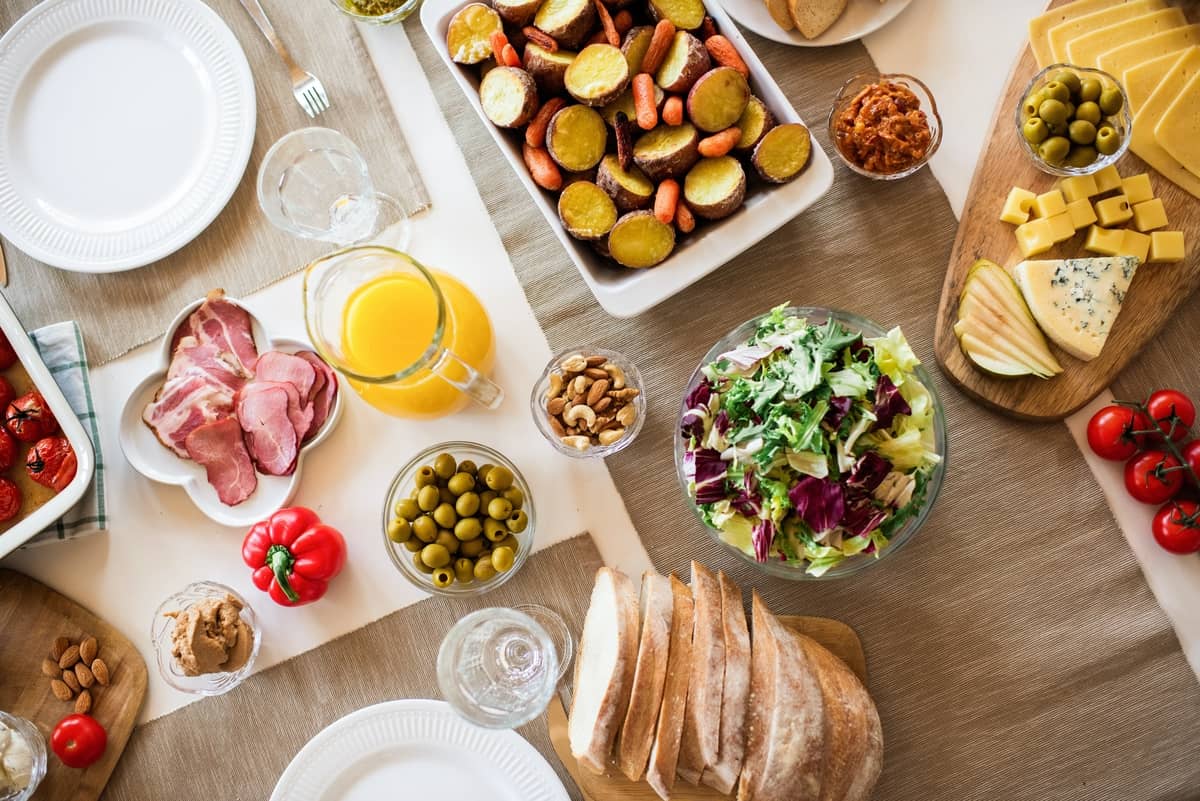 Both countries’ meals are traditionally equally composed of three parts: starters, which may include a soup, first course and dessert. Both diets are rich in fresh, seasonal and locally available ingredients and are usually accompanied by local wines. If you want to know more about Portuguese wines, read our guide here.

Spain is very well-known for its so-called tapas, which are small plates of individual dishes. Tapas are usually served along with a drink. They can be cheeses, serrano ham or other cured meats, mussels, olives, tortilla, which is an omelette cooked with eggs and potatoes, among others.

Another ever-popular dish from Spain is paella de marisco. Originally from Valencia, it is usually prepared with vegetables, seafood and a mixture of pork and chicken. There are a lot of varieties of paella, being arroz negro one of them. In this version, rice is prepared with squid ink, giving a more pronounced seafood flavour. Explore more about the city of paella here.

Gazpacho is also a signature Spanish dish, that consists of a soup made of tomato and other ingredients like cucumber, sweet bell peppers, onions, garlic and olive oil. Regarding meat, you can find a lot of different types of meat in Spanish cuisine, such as beef fillets, roast lamb or pork loin. In winter days, it is common to serve a comforting stew, like the fabada Austuriana, a bean and sausage casserole originally from the North of Spain. 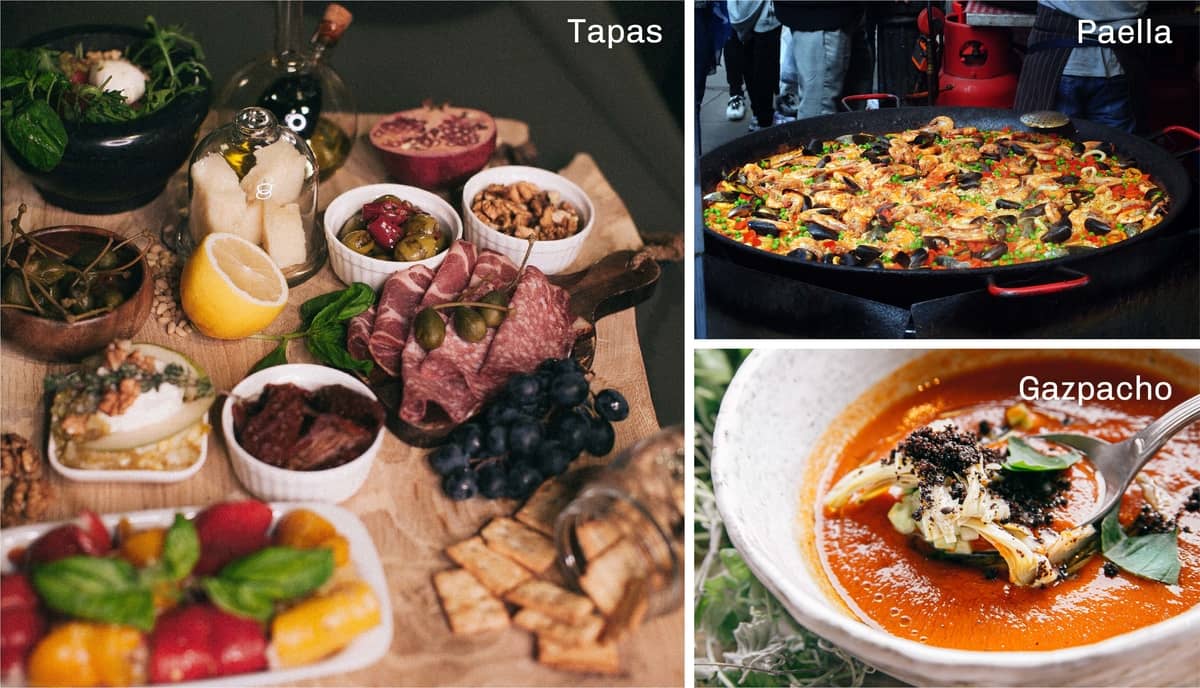 Although it is very famous in Spain, bacalhau - codfish - is primarily one of the most popular dishes in Portugal. It is cooked in a variety of different ways, from more traditional to fewer ones. A more contemporary codfish dish is bacalhau com natas, made with cream, while bacalhau à Gomes de Sá is a more common meal among older people, consisting of a casserole of codfish, potatoes, eggs, olives, olive oil and onion.

Leitão is Portugal’s version of suckling pig, and it is an example of the multiple beloved Portuguese pork-dishes. Pork can be found in a lot of recipes, one of them being carne de porco à alentejana. This traditional Portuguese dish combines marinated pieces of pork with clams and is drizzled with a slightly spicy, wine-infused sauce.

Portugal is also famous for its croquettes. Whether they are made of cod or meat, they are part of the most typical appetizers, that never miss the centre of the table, as well as bread and wine.

Similarly to paella in Spain, rice-heavy dishes are also present in Portuguese cuisine. Arroz de pato is an example of that, a dish made of rice, duck and chorizo sausage. 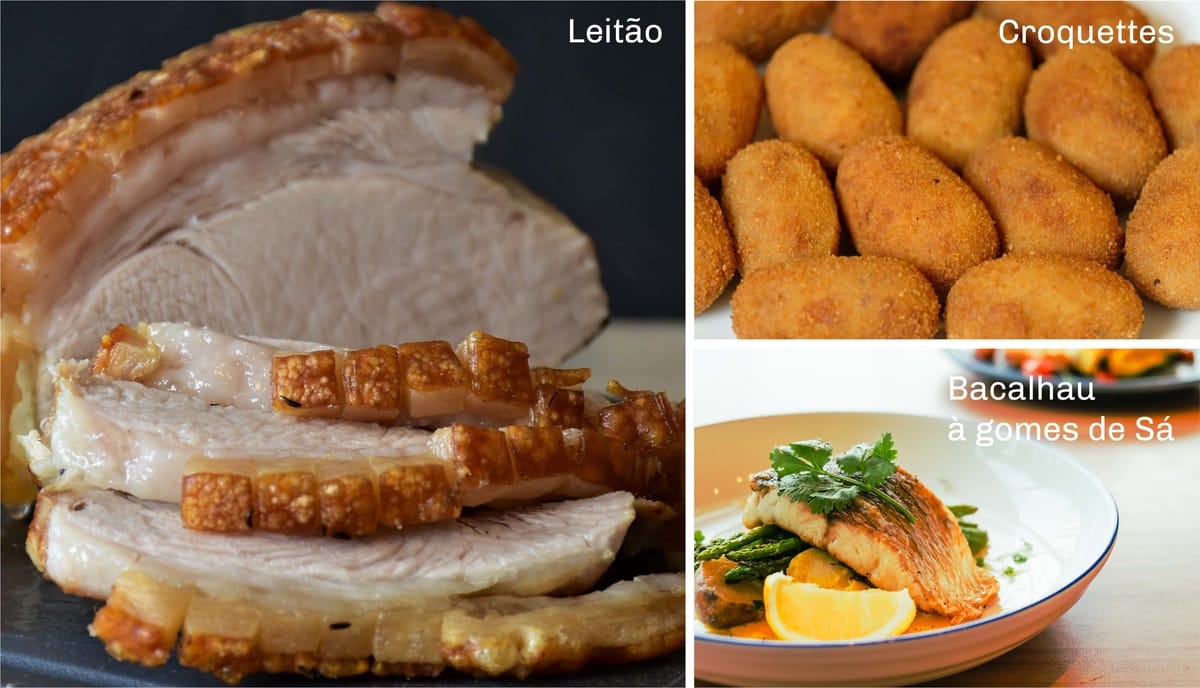 Here you can find the Top 10 foods you can’t miss when visiting Lisbon.

Mediterranean lifestyle is another important reason why these countries are the healthiest worldwide. Iberians give great importance to sociable mealtimes, as those are occasions for connecting with family and friends. It is proven that this practice helps bodies create endorphins, acting as a mood booster. Simultaneously, having much respect for meal times makes people put in a lot of dedication into their preparation, not tilting their diets into the fast-food westernised growing culture.

These cultural habits stand for a relaxed and sociable lifestyle, that deeply characterizes Portuguese and Spanish natives. The ability to create meaningful and warm connections with people are strong features of these nations.

These countries are also highly well-known for their privileged weather, with lots of sunny hours a day and good temperatures. Through exposure to sunlight, people can easily absorb the necessary Vitamin D they need to keep their muscles and bones strong.

All in all, there are “cultural differences that hugely determine whether a country leads a healthy or unhealthy lifestyle.” Portugal and Spain fared well in comparison to other destinations, highlighting high standards of healthy living.

These Iberian countries have also taken advantage of the recent period of economic recovery, attracting investors, and also being considered two of the most attractive real estate markets by Forbes. If you would like to visit both, here is your guide where we break down the differences between the two sunny European countries. 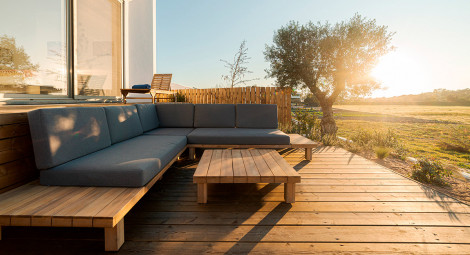 Portugal is the third EU country to concede national citizenship
Eurostat data show that it was in Sweden that, in 2019, there was a higher…
Next Article 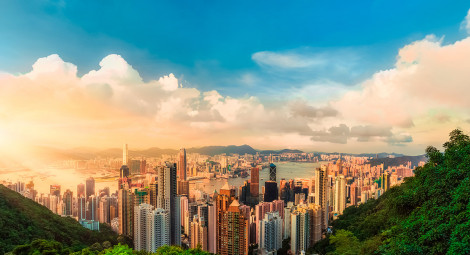 Hong Kong investors take advantage of the Portugal Golden Visa
Due to the recent Government announcements, Hongkongers are finding their…