European countries offering the residency by investment programme had different behaviours, as well as have had a different scale of impact. While statistics for Portugal and Spain were left untouched or barely changed, the UK’s Tier 1 Investor Visa had a significant fall, while Greece and Latvia Visas completely collapsed.

Economical factors, better protection for their property and assets, immediate profit, rental income and housing appreciation may have prompted investors to purchase Portuguese real estate during the pandemic. In addition to these, health concerns may also have led them to consider their own private healthcare or life insurance cover.

Full year-figures for 2020 confirmed that investors remained interested in the PT Golden Visa scheme throughout the year. Despite the annual total approval numbers falling by 5% compared to the previous year, 2020 still presented significant positive monthly fluctuations. In April the SEF accepted 50 applicants but managed to hit a new number with 270 applications in May, which helped the country get back on track.

Over the past two to three years, the Portuguese residency by investment programme has seen a brimming growth as applicants became aware of its competitive price points. The habitual €500k Golden Visa was the investor’s top choice, however, in 2020, 31% of the investors chose more affordable options such as real estate through Golden Visa €350k, as well as the €280k option and venture capital, three subgroups that have been seeing an avid rise.

Truth be told, programmes around the world have been facing logistical, political and technical struggles during the pandemic, which is negatively impacting the number of applications that could be coming through and being processed. However, Portugal remained unaffected by this scenery and has been able to keep that processing more or less uninterrupted. Hence, Portugal’s Golden Visa programme has stayed flat which is an achievement itself considering the circumstances.

It becomes important to mention that Portugal has emerged as the most attractive path for investment migration, thanks to its low cost of living, low crime rate, ease of doing business and the fact that English is widely spoken in the country.

The Real Estate Market In Portugal Post-Covid for US Citizens

All in all, the Portuguese Golden Visa programme appears to remain untouched by the global pandemic, and proof of that are the investments that exceeded on the first third of 2020, administering over €146 million into the country.

The country has had a remarkable outcome considering the negative impact that the Coronavirus outbreak has had on other economies and real estate markets across the world. This also came to prove that although the real estate market goes up and down depending on natural causes such as the pandemic, as well as political and governmental factors, it never actually deteriorates nor declines over time. Read more about real estate as a secure lifetime investment here.

There have been new changes to the Golden Visa programme for 2022 announced by the Government. If you wish to purchase real estate through the Portugal Golden Visa in the premium areas of Lisbon, Porto and other central cities, you may do so until the end of 2021. Read our CEO and Managing Director’s full statement and advice here.

2020 was a tremendously harsh year for Spain, and despite the crippling levels of restrictions, the country still approved 683 Spain Golden Visa applicants during the first half of the year, a significantly small number compared to the 1422 applicants of the previous year.

Spain and Portugal: a guide for real estate and property investing

One of the most sought after, undisputed and leader programmes in Europe ended up suffering the most due to investors not being able to enter the country and provide their biometrics. Europe’s border restrictions made it impossible for them to apply to the Greece Golden Visa.

Before the coronavirus outbreak, foreign direct investments in Greece were skyrocketing, however, the number of applicants dropped from 3504 to 403 in just one year. Experts believe the programme in Greece will be able to recover in the second half of 2021 once summer starts, and after the vaccination period.

How many square meters of property do Residence Programmes buy you in Europe?

As Britain imposed harsh lockdowns in December, the true 2020 performance of the UK Investor Visa was really weak. There were only 164 applications, compared to the previous year with 360.

What happens to Portuguese citizenship holders after Brexit?

Latvia’s Golden Visa has actually been collapsing since 2015 and the pandemic appears to have put an end to the programme; only a total of 30 applicants were approved in 2020. 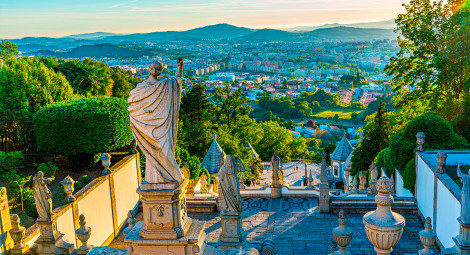 Braga, Portugal elected best European destination to visit
It wasn’t Rome, nor Paris, nor the Canaries. In a year marked by the…